Complete The Second Round of The Test of Courage Genshin Impact

Complete The Second Round of The Test of Courage Genshin Impact: There are a number of requirements if people want to take part in the new Genshin Impact event.

The Archon Quest’s Chapter 2 – Act 1 and Ritou Escape Plan both require Adventure Rank 30 or higher, respectively. Players will begin and complete the first round of the Test of Courage before moving on to the second round.

The Test of Courage is a part of the brand-new Akitsu Kimodameshi in Genshin Impact competition. The player’s selected character can be used for three rounds. To win the grand prize, travellers and their companion must find a specific thing in a specific area of Chinju Forest before their rivals.

After finishing the first round of Genshin Impact, players will encounter Ei, who will tell them about Akitsu Yuugei. After the new game is over, the Test of Courage will continue, and participants can now participate in the second round. 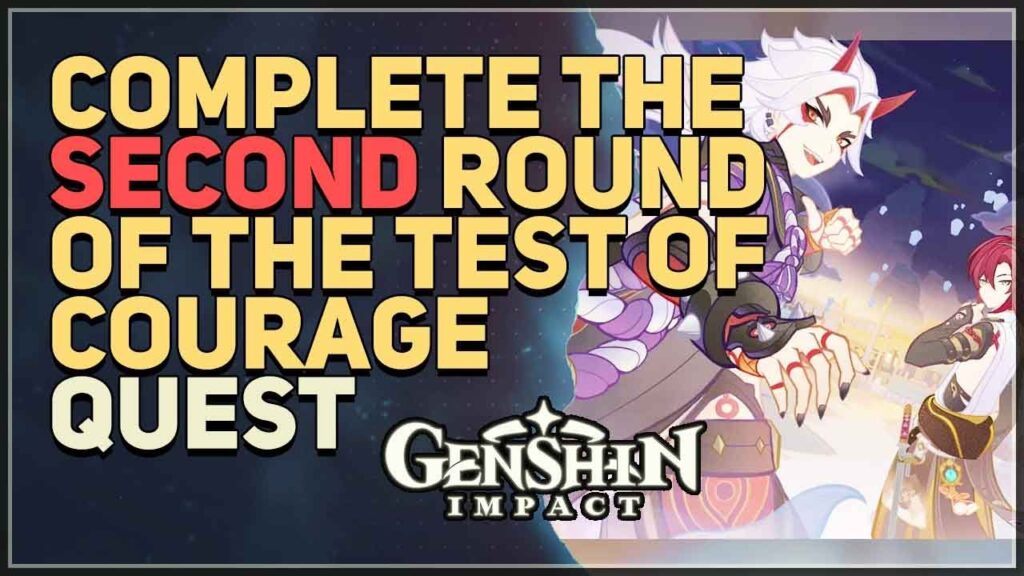 The Oni informs players to play normally in the following round when the Traveler arrives at the designated location, where Arataki Itto would be waiting to meet with him. The Oni then adds that he intends to capture the three kids who escaped.

The left and right lanes of the street will now separate. By going right and then ascending the slope, one can reach Genshin Impact’s Fan.

If players want to stay out with their friend and hear some horrific tales, they should make sure to circle the area before taking up the item. Each individual has a distinct story to tell, and each one will be triggered by an uncommon occurrence during the Test of Courage.

Ignore the Onikabuto coming down from the sky and continue up the dirt route you came from. Turn left and cross the river when you see a big set of stairs. A few signs can be seen in the distance.

For instance, Yoimiya tells the tale of the Genshin Impact, in which bad spirits are imprisoned inside shrines and make ominous noises to attract victims as they climb the stairs to the shrine. Until they are close enough for the spirit to leap out and liberate itself, the poor soul will be imprisoned inside the shrine.

At the Kamisato Estate in Inazuma, have a conversation with Ayato. After hiring you and Paimon, he dispatches the two of you to Chinju Forest. Arataki Itto stops you just outside the estate and asks for your help in setting up a challenge of his own for his raucous gang.

Take the path that runs south from Kamisato Estate and enter the forest to find the shrine woman. She briefly terrorises poor Paimon before informing you that three other Inazuma friends are around and that you must pick one of them to accompany you on your treasure hunt.

The second round of Test of Courage starts off similarly to the first. Return to Chinju Forest and speak with the Shrine Maiden there first.
Similar to the first round, the companion you select will determine the only possible dialogue you hear during the challenge. Select the person(s) you wish to hang out with, and enjoy the experience.

This time, there are several route forks since Ayato hid a fan in the jungle. The first fork in the road, where the path to the right leads up some stairs, is where you should turn left. Only a few cabbages are visible in the chest on the right.