Master of Puppets Emote Fortnite: The game developer announced that a new emote based on the Metallica song has been added to Fortnite. Three actors perform live in front of a crowd in the music video. To jump to the present, they are merely playing “Master of Puppets” in their garage.

The Netflix series Stranger Things gave Metallica’s song “Master of Puppets” a significant pop culture resuscitation, so if 2022 wasn’t the year of Kate Bush, it was most definitely the year of Metallica. Given that the song will be played again in Fortnite’s battle royale mode, it is clear that the cultural renaissance is far from over.

Prepare to have your strings pulled now that Fortnite has the “Masters of Puppets” in it. The developers have officially welcomed Metallica into the game by including their iconic song Master of Puppets as an Emote. Users that are interested can purchase this emote from the Item Shop for 500 V-Bucks.

The addition of the renowned metal band Metallica to the game has the Fortnite community in a frenzy. Players are thrilled that the developers are aware of what gamers desire, even though it is just an Emote. The Master of Puppets Emote is yet another fantastic addition to the Icon Series, in the opinion of the community. 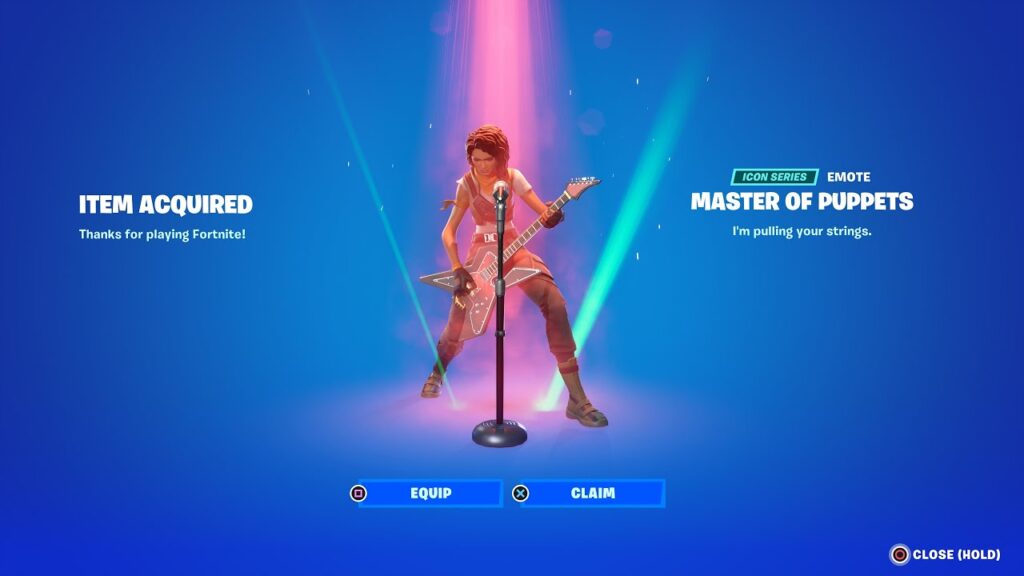 The Master of Puppets Emote, the most recent addition to the Icon Series Emote, was just made available in the Item Shop by the Fortnite developers.

Master of Puppets is the fourth Icon Series Emote in Fortnite Chapter 4 Season 1. The cosmetic item is made to resemble a member of Metallica, and the emote matches their appearance.

Players need to be informed that the Master of Puppets Emote costs 500 V-Bucks. Unlike other cosmetic items, this Emote is synced. Players who have the emote can be joined by other players. Multiple instruments can be played at once by up to four participants.

The band Metallica is incredibly popular. Although both metalheads and casual players enjoy the crossover and are anxious to have the Emote, its 500 V-Buck cost is a disadvantage. Fortunately, there is a solution for players who want to earn 500 V-Bucks.

Metallica has a long history of being highly reluctant to provide permission for the usage of their music in motion pictures and television. But it’s clear that attitude has changed since Stranger Things’ summer season premiere.

The band’s 1986 smash Master of Puppets was played during the pivotal scenes of the fourth season finale when Eddie Munson tore it up to the metal classic while attempting to divert attention in the Upside Down.

While Metallica has the internet buzzing, Epic Games has yet to comment on the likelihood of a partnership. It’s possible that James Hetfield and the other band members have yet to arrive, and that the crossover just involved an Emote.

Score Points By Performing Tricks On A Dirt Bike Fortnite

Rambunctious Emote Fortnite 2022: Is it the Rarest Emote?