With the six factions in Dragonflight. The Cobalt Assembly, Wrathion and Sabellian, Iskaara Tuskarr, Maruuk Centaur, Valdrakken Accord, and Dragonscale Expedition. You can gain reputation, or more accurately, Renown.

To be clear, there are four major Renowns. Dragonscale Expedition, Iskaara Tuskarr, Maruuk Centaur, and Valdrakken Accord—with which you can advance. In addition to two others that still work under the previous system. Wrathion and Sabellian and Cobalt Assembly.

Blizzard Entertainment changed the way reputations function in Dragonflight by swapping them out for the Renown system introduced in Shadowlands in an effort to modernise outdated procedures that were just too tedious and time-consuming to finish.

Renown will only grant you cosmetic items for you and your Dragonriding drake. As well as recipe patterns. In this expansion as opposed to game-changing bonuses. 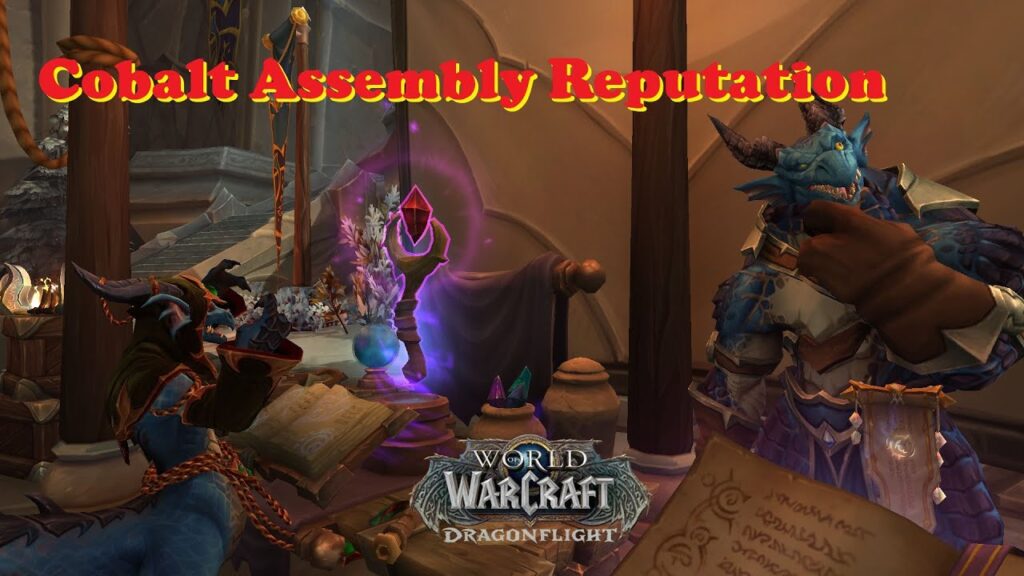 Which is situated in the Azure Span, will be crucial for artisans like alchemists, leatherworkers, and tailors because they have crucial recipes for them.

If you are not a crafter, you can grind this reputation to get exclusive transmogs and Dragonriding drake customizations that are not available anywhere else.

This comprehensive guide to the Cobalt Assembly reputation includes information on what it is, how to unlock it, how to gain reputation, and, most importantly. The benefits associated with reputation if you want those tasty transmogs and recipes.

The faction is based in the Azure Span, and the restoration of their Sundered Flame-scarred community is their main priority. A Dracthyr faction known as the Sundered Flame or Ebon Scales enlists lesser dragonkin and rebels against the dominance of dragons over other dragonkin races.

You must level 70 in Dragonflight in order to unlock the Cobalt Assembly reputation. The Cobalt Assembly in Azure Span is where you must go next. You must finish the quest chain that begins with the mission Welcome to the Assembly to get there.

After completing the chain, you can move forward with the Cobalt Assembly. It would be best if you started the grind after you gathered some gear because you should keep in mind that the vast majority of mobs that yield reputation will be elites.

Farming adjacent Sundered Flame foes with a high probability of dropping Wild Arcana will help you build up a good reputation with the Cobalt Assembly in Dragonflight. You can get it in the form of Rare Major Arcana.

Which offers 200 reputation, or Uncommon Moderate Arcana, which gives you 15. The  has five tiers. Empty, Low, Medium, High, and Maximum—in contrast to other Dragonflight reputations. Which have no reputation at all.

Aside from that. As your reputation with the grows. You can use Wild Arcana Orbs to hasten the killing of monsters. In essence. You’ll be able to select from a set of abilities that work similarly to Anima Powers in Torghast. These temporary orbs are dropped each time you kill a mob.

In the Cobalt Assembly base. You also have Wild Arcana reservoirs that, after you reach a particular reputation level.  It will provide you additional bonuses and perks to help you farm more quickly and effectively.

One of Dragonflight’s newest reputations and a component of the Valdrakken Accord is This. It is up to you to assist the Blue Dragonflight since the Sundered Flame has dried up the region that was once a site of creation for them.

DF Although the  reputation is not one of Dragonflight’s more significant reputations. It will be crucial for those exploring professions in the expansion because it contains some crucial recipes for a few professions.

How to find the Forgotten Gryphon in WOW