Glide 250 meters with the grapple glider in one shot

Glide 250 meters with the grapple glider in one shot:

The most recent mobility item added to Fortnite following the 22.40 update is the Grapple Glider. Players can redeploy their glider mid-air and glide as far as the wind will carry them, much like Jules’ Glider Gun and Batman’s Grapnel Gun, in this game.

Epic Games always tries to get players to utilise new items before they are vaulte, which is the case with this one. Players must use the Grapple Glider to glide 250 metres in a single motion. Those who succeed in finishing the mission will receive 20,000 XP.

Read Also: How to Hunt a Glowing Loot Animal Fortnite

Read Also: Drive a Vehicle Into a Chrome Vortex and Fly Around It for 10 Seconds Fortnite Quest 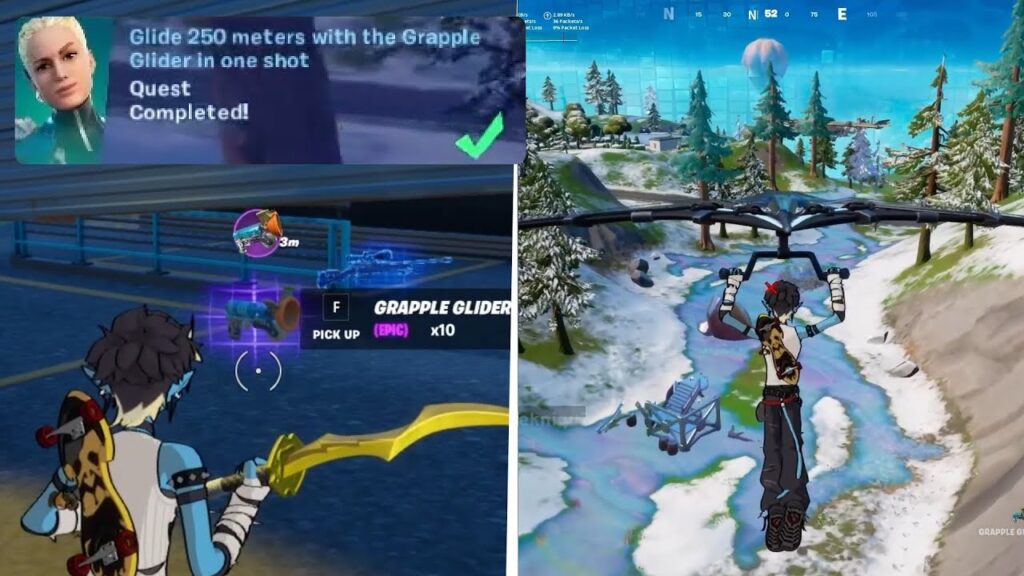 Landing in a safe area to pillage and acquire supplies is the first step in achieving this challenge. Not being shot at will be beneficial because it will take some time to set up everything so that the task at hand can be complete.

Having said that, you can look through floor treasure, chests, and Supply Llamas to find the Grapple Glider. Given that the item was added to the game following Fortnite update v22.40, its likelihood of spawning frequently should make it simple to locate.

Players will have to set things up differently depending on the mode they are in when taking on this challenge. Here is how to configure everything in either mode.

Read Also: How to Complete a Lap in Under 2 Minutes 30 Seconds in Octane Race Fortnite

Players will need to find lofty buildings and constructions in the Fortnite Zero Build mode. It will be crucial to ascend as high as you can. Tainted Towers, Chrome Crossroads, and Rave Cave are a few places that are fantastic for verticality.

In Fortnite’s standard build mode, players must collect resources to build vertically in order to ascend as high as they can. A straightforward ramp with an expanded floor structure should be adequate. They can also use the Zero Build mode to avoid consuming resources, as an alternative.

Executing the subsequent step will be the most important aspect of the task once a tall building or structure has been located or a ramp has been constructed. When done incorrectly, you run the risk of suffering fall damage and possibly getting fired.

To shoot the Grapple Glider, Fortnite players will want to aim towards the edge or tip of a hard surface.

Players must precisely time the deployment of their gliders after being launch into the air. The objective is to glide for a continuous 250 metres without using the Grapple Glider a second or third time.

Consequently, it is crucial to attaining the highest verticality possible before launching the glider. As a result, players won’t have to waste too much time attempting to acquire 20,000 experience points and the challenge will be achieve on the first try.

Even though Fortnite Chapter 3 Season 4 is coming to an end. It is probably holding the most material since the game’s inception. In addition to its narrative and cross-over challenges. Week 9 will provide a brand-new set of seasonal tasks for players to complete. Though, given that their goals include hunting, emoting, and even gliding using one of the battle royale’s newest equipment. Don’t expect them to have a common theme. Here is what Fortnite Chapter 3 Season 4 Week 9 will shortly offer more XP for.

Week 9 simply urges players to soak in some of the current island’s attractions one final time even if the next season is likely to provide a new map. One involves going to the bunker of the Bao Bros and dancing there. While another involves entering one of the two Chrome Vortexes. The Grapple Glider and Dial-A-Drop now each have their own unique challenges. So you may even anticipate gaining XP by exploiting the most recent additions to the treasure pool.

Read Also: Drive a Vehicle Into a Chrome Vortex and Fly Around It for 10 Seconds Fortnite Quest

Read Also: How To Get Whiplash In Rocket League