Participate in the theme challenge and receive limited rewards by becoming the strongest executor. Earn Encrypted Disks by taking part in events, which you can then redeem for prizes at the Keepsake Store. Without letting the rest know, take out the adversaries one at a time. A red cone serves as the guard’s field of vision indicator.

We will begin this minigame at the top of the Tower of Fantasy and use your jetpack to slowly descend. It only need to land on the sentries in order to kill them because they are immune to normal attacks. 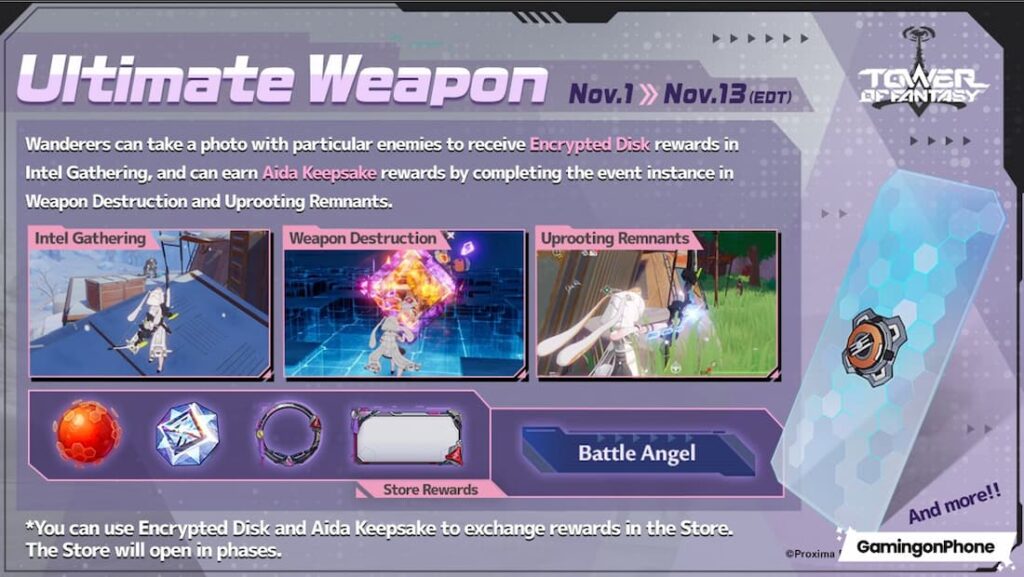 You have to continuously attack the Valkyrie while dodging all of her projectiles in this bullet hell-style minigame. The Valkyrie has an HP bar, but the only objective is to live through the entire minigame.

Players will need to finish three different stages in order to receive rewards as part of Tower of Fantasy’s newest event, the Ultimate Weapon Event. The Tower of Fantasy event has one stage, called Intel Gathering, and is scheduled to last until November 13.

Tower of Fantasy’s Ultimate Weapon Event includes three levels in which players can win rare goodies as a part of the new Vera expansion. The following days will see the three phases open:

1  November: Intel gathering
Up to November 13, there will be weapon destruction on Tuesdays, Thursdays, Saturdays, and Sundays.
Remnants are being uprooted every Monday, Wednesday, Friday, and Sunday till November 13.
After completing the event stages, you will receive Aida Keepsakes, which can be used to purchase Red Nuclei and other rare things from the Keepsake Store. Follow these directions to access the event and Keepsake store:

Click the gift icon in the top right corner of the screen while holding Alt if using a PC.
At the bottom of the screen, select the Ultimate Weapon tab.
On the pink button in the screen’s centre, select the Keepsake Store trolley icon.

The Ultimate Weapon event is still going on. You can receive a variety of highly helpful awards during its duration, which is from November 1 to November 13. (especially if you are a F2P player). We’ll go into great detail about its benefits and features in the article. It is crucial to note that it is preferable to avoid skipping parts 2 and 3 because, according to the event’s structure, which we will discuss below, you will need to gather resources within 7–10 days in order to obtain more or less valuable awards.

Encrypted Disk and Aida Keepsake are the two sorts of cash you receive for completing the event’s many tasks. They can be traded for the following goodies in a unique separate store that can be found on the event page. Only the first section of the store is open at the time of writing; the second will open on November 7. Some things also have their own specifications.

The above-mention event’s feature is that you are only allow to receive 1200 Aida Keepsakes per day; anything beyond this amount is waste. Due to this, even purchasing red cores will require at least two days, whereas with the second currency, you can instantly obtain the maximum amount and purchase all rewards.

Using the selfie function in-game, it is essential to snap images of 18 specific opponents; in exchange for each photo, 200 Encrypt Disk are award. In the PC version, you must locate the designated enemy, click on the tiny camera icon in the upper corner, and then click on the camera icon on the right in the resulting interface. It is important to note that you do not need to be outside of fight, approach the opposition, find a favourable perspective, or adjust settings. It is only crucial that the target was in your line of sight when you took the photo.