Pick Fruit from Reality Saplings (0/3): There are a tonne of POIs and other interactive features in Fortnite Chapter 3 Season 3. The most intriguing of all is the Reality Sapling, a unique item in the game that resembles an actual sapling but has additional abilities.

Players have to bury three Reality Saplings across the battlefield as part of the Zero Week Challenge. Since the challenge was completed two weeks ago, the majority of the saplings that were planted during those previous weeks are already producing Mythic treasure, providing players a good chance to obtain a Mythic weapon at the beginning of the game. 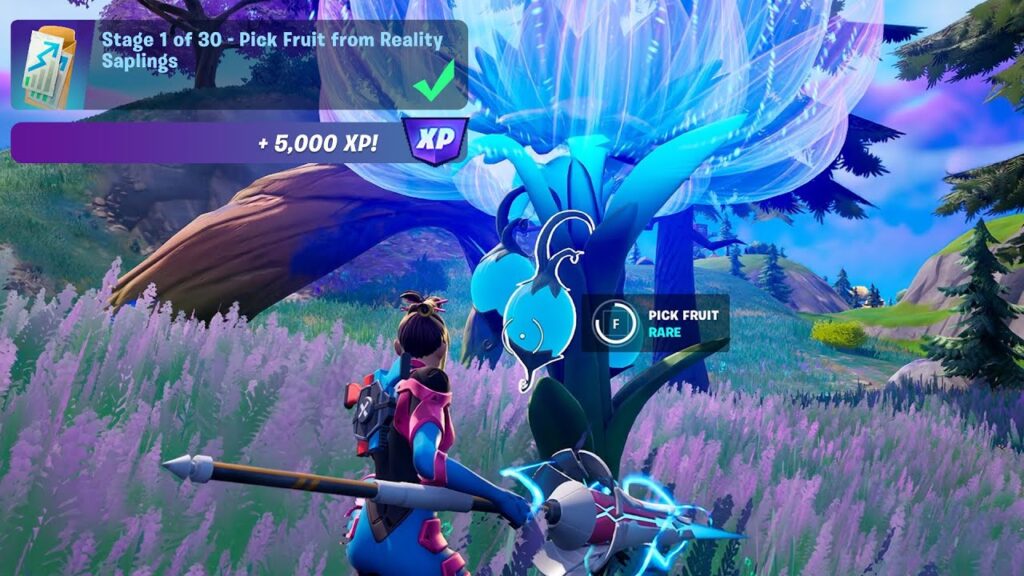 However, the most important thing is that players cannot pick Mythic fruits from saplings planted by other players.

There are some opportunistic individuals that try to take the Mythic fruit from someone else’s work while the majority of people are reaping the rewards of their efforts in the saplings. Is it really so simple to take advantage of other players in Fortnite, or does Epic have a mechanism in place that stops it?

Exploring Reality Saplings and their loot in Fortnite:

In the recently introduced Reality Bloom biome, Reality Saplings are created for the uninitiated from Reality Seeds, which are found in the Reality pods positioned all around the Reality Tree.

After finding the Reality Pod, players can break it open to obtain Reality Seeds. They can hurl the seeds after they have them to grow a Reality Sapling.

As this sapling develops, it produces fruits that give players rewards of varying rarities. Players must work on it just like in the real version before it produces any results. There is also a cool-down period before it can bear fruit again, and they are forced to remove undesirable plants from the area around the sapling.

The majority of the Reality Saplings that were planted at the time are now producing Mythic fruit because players had to finish the challenge during the first week of the Fortnite season. Players may not always be able to land at the location where they planted their own sapling, therefore those that grow Mythic fruit are more vulnerable to being looted by other opportunistic players.

Read Also: Where to find Enter a Chrome Vortex in Fortnite Quest

KobesMind, a Fortnite YouTuber, investigated the possibility of users choosing different Mythic Saplings. The developer of the video landed close to Reality Falls at the beginning.

The creator noticed a Reality Sapling with a Mythic fruit right. After landing and attempted to eat it, but failed. The creator made yet another purposeful attempt to destroy the Reality. Sapling in order to obtain the fruit, but it failed and vanished.

The creator was not permitted to pick another person’s fruit. On a different Reality Sapling, the designer used the same strategies, but the result was the same.

Fortunately, the designers were aware of this potential issue and had a plan in place to thwart any negative actions. Epic does a great job at looking for potential issues and fixing them.