Walter White Fortnite: Breaking Bad is one of those series that continues to exist in fans’ hearts long after the final episode has aired.

Fans have previously been eager to learn anything about a Breaking Bad and Fortnite cooperation. Better Call Saul’s final episode will premiere on August 15, 2022, whereas Breaking Bad’s series finale aired in 2013. Some people think that this would be the ideal time for a crossover with the battle royale game. 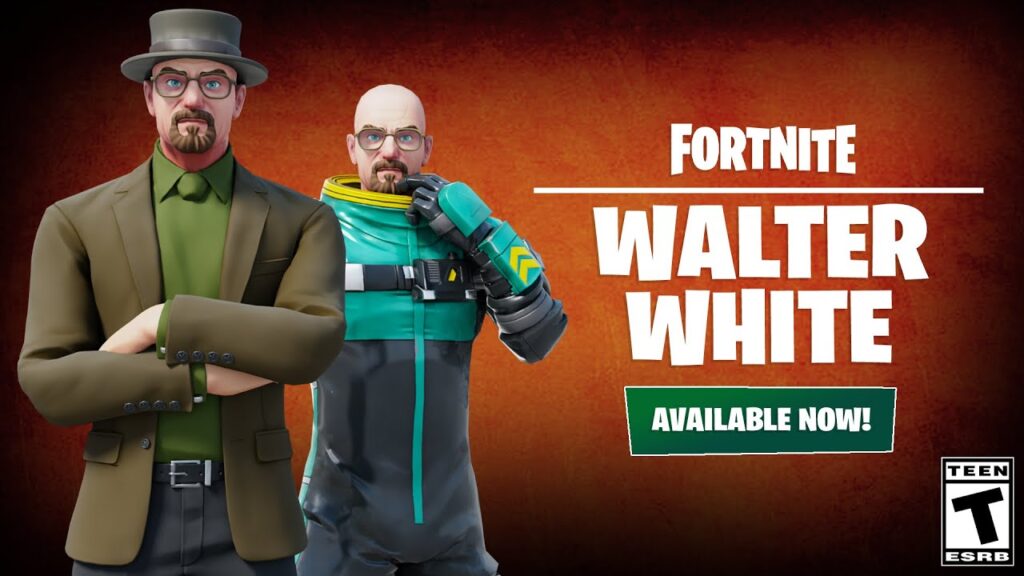 As a result, there has been a slight comeback in the Breaking Bad fanbase, with followers wanting to see the recognizable characters in some similarly well-liked video games. Characters like Walter White and Gus Fring can be added to Multiversal through a variety of mods (though those could soon cause players to be banned from the game).

Will Walter White or the ‘Breaking Bad cast come to ‘Fortnite’?

Unfortunately, Epic Games has not yet made it official that there will be a crossover with the well-liked AMC series. For years, Breaking Bad fans have asked Epic Games to make limited-edition skins of Walter and Jesse for Fortnite, but the game developer hasn’t made any public statements about the possibility of such a partnership.

Similar crossovers between Fortnite and AMC programmes have already been done; they previously worked with The Walking Dead. The main character of the show Rick Grimes, Daryl, and Michonne all received skins.

While this demonstrates that Epic Games and the network that hosted the Breaking Bad universe have a working relationship, it regrettably does not imply that any of its intellectual property will be utilized in subsequent projects.

Despite this, there are numerous online speculations and leaks about upcoming skin collections for the game. The possibility that Saul Goodman, Walter, or Jesse would soon appear in the game gives fans a lot of hope, even though we are unable to confirm the veracity of any of these leaks.

A Fortnite survey revealed the Fortnite and Breaking Bad crossover:

One of the most watched TV shows of all time is Breaking Bad. It tells the somewhat contentious tale of a high school teacher who turns into a meth cook. However, Epic Games might include the show’s characters without altering the game’s rating for maturity.

It’s important to remember that several characters from R-rated television shows and movies, including John Wick, have previously been introduced by Epic. This has never been an issue and most likely never will be.

With the most recent Fortnite poll, the video game developer teased the addition of Gustavo Fring. He is a well-liked television character who would fit in well with the Fortnite x Breaking Bad crossover.

The community is surveyed by Epic Games on a regular basis to find out which characters they would want to see in the game. The other clue, which is an abandoned van in the desert, is the first one that Epic has made public. As the very first episode of the show involves a van in the desert, Breaking Bad viewers are already familiar with the area and the vehicle.

The release of the Fortnite x Breaking Bad crossover is all but guaranteed. But the real question is whether Epic is holding off on this massive project until Chapter 3 Season 4.