Rustler Character location in Fortnite: Week 0 quests for Fortnite Chapter 3 have already started. By completing these objectives, players can begin leveling up and moving forward in their Battle Pass.

One of the weekly goals is to interact with the NPCs Sunbird, Moon Hawk, and Rustler in a single game. Fortunately, this is one of this week’s easier assignments. There are now several extra NPCs in the brand-new Vibin season. Additionally, players should get to know all of the NPCs because they can be incredibly helpful. In addition to dropping free items, NPCs also give high-tier weapons and goods if players are having problems finding worthwhile treasure. But for the first week, Sunbird, Moon Hawk, and Rustler are the most important NPCs. 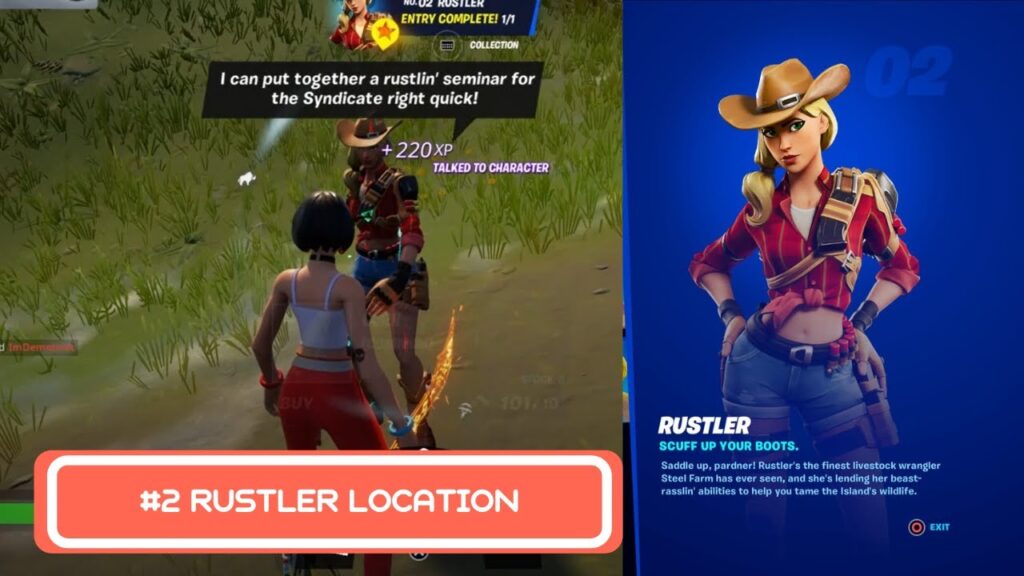 How to interact with Sunbird/Moon Hawk and Rustler in Fortnite Chapter 3: A Step-by-Step Guide:

As a brand-new season begins, Epic Games encourages players to get to know the new NPCs on the map. The first week’s quest for players in Fortnite Chapter 3 Season 3 is to meet the Sunbird/Moon Hawk and Rustler. If players engage with two of these NPCs in a single game, they will be rewarded with a large amount of XP. Sunbird or Moon Hawk may be spotted investigating the brand-new site to the north of the Daily Bugle, while Rustler is at the Shifty Shafts POI. Players can take the following steps to complete the Week Zero quest: Players should try to land at the Shifty Shafts POI as soon as they exit the Battle Bus in case they are not included in the following storm circles. Additionally, players must be aware that Sunbird and Moon Hawk are the same NPCs, despite the fact that their appearances change based on the time period of the map.

All the NPCs in Fortnite Chapter 3 Season 3:

The brand-new season offers players a tonne of fresh content. Chapter 3 Season 3 is a completely new experience with new characters, weapons, POIs, and cosmetics. Meeting fresh NPCs is another aspect of this experience.

Here is a list of all the new NPCs in Fortnite Chapter 3 Season 3:

Is Fortnite a good video game?

We are happy to have given Fortnite a rating of 75% because it truly is a fantastic video game. Fortnite is a game that every competent gamer should have played at least once in his or her life. In fact, it’s one of the greatest in its category. In a nutshell, you absolutely must give it a shot if you get the chance!

Is Fortnite a recent game?

No, Fortnite was released in most places on July 25, 2017, which was five years, one month, and twenty-six days ago. Microsoft Windows, PlayStation 4, Xbox One, Nintendo Switch, PlayStation 5, Xbox Series X|S, Mac, Android, and iOS users can now download Fortnite.

Players will be able to purchase things, weapons, and other benefits from each of these NPCs. As a result, players should note down every NPC’s location and travel to each one in accordance with the storm circle.

Previous article
Bao Bros Character Location in Fortnite Chapter 3 Season 4
Next article
How to Rank up Faster in Dota 2: Tips and Tricks for all MMR ranks