Gwen Stacy Fortnite Skin: How to get

Gwen Stacy Fortnite Skin: The newest season of Fortnite has started and with it a new battle pass with cosmetics and skins for players to unlock. While the majority of the characters in the most recent pass are exclusive to the Fortnite universe, Spider-Gwen, a.k.a. Gwen Stacy, in her recognisable Spider-Man: Into the Spider-Verse outfit, is its signature unlock.

The Chapter 3 Season 4 battle pass will offer 100 levels of standard cosmetics, much as in previous seasons, and a tonne of extra levels with more cosmetics for gamers who are very dedicated to the grind. The pass has a free version that also has certain unlockables, while the premium edition of the pass costs 950 V-Bucks. And if you decide you want the upgrade, you can always buy the pass later and keep your credit.

As other Fortnite battle passes, this one will come with a unique skin that will only become available later in the season and will necessitate completing a number of unique objectives. This time, the skin’s name is The Herald, although Epic hasn’t yet provided any details regarding its appearance. 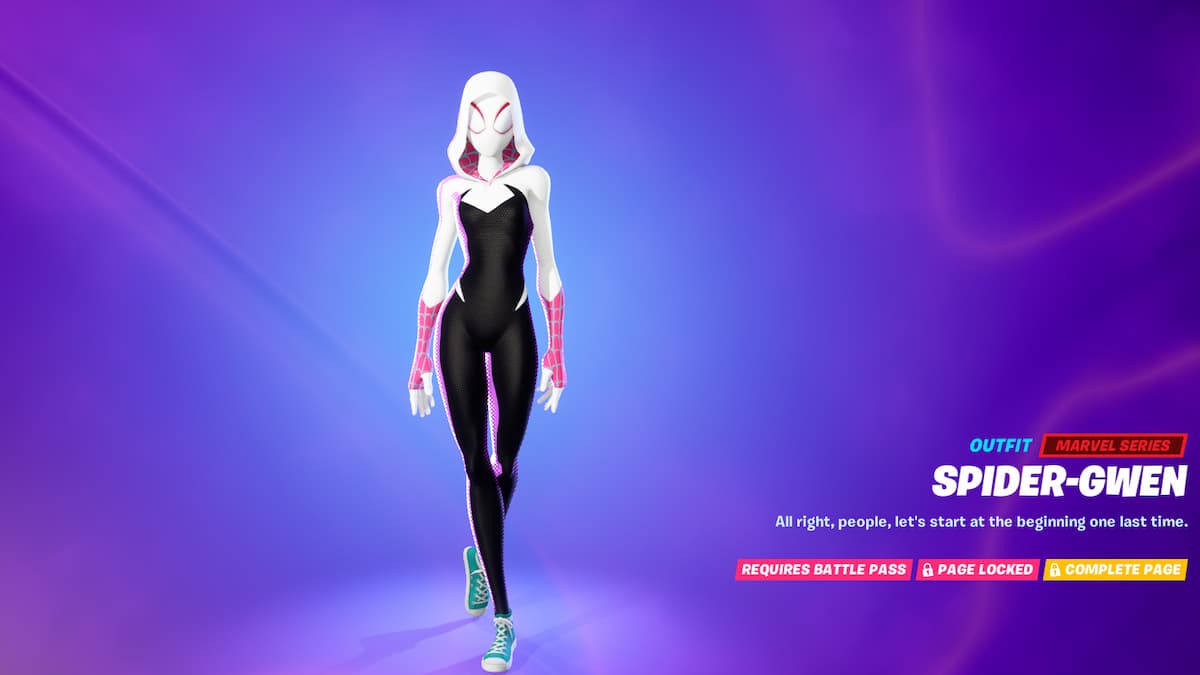 Paradigm It’s true that Brie Larson’s Paradigm is the top skin this time around, but you can also unlock other looks for her, like one with armour and a helmet on. Her holographic sword-like mining instrument is my favourite.

(Page 2) Hollow Beginning with Hollow, a man with a gothic appearance who has access to Chrome hands that double as his mining tool and glider, the Chrome invasion has begun. Given that we just witnessed the Chrome devour the other Seven members in the opening scene, I suppose he is meant to be a villain.

(Page 4) Grizz We now enter the customary “strange experimental design” skin from Epic, which features a smaller bear inside a larger bear that you can operate using a game controller. Indeed, why not. It seems like fun.

Meow Skulls (Page 5) – This skin, an emo take on the well-known Meowscles skin in which he is now skinny and into playing the guitar, was leaked ahead of time. The laser pointer emotes you may unlock in his kit is probably my favourite aspect of this page.

(Page 6) Lennox Rose More original designs than just crossovers, like those with Naruto and Dragon Ball Z, have been added to Fortnite’s recent anime-themed skins. Lennox Rose, sporting pigtails, a spiky jacket, and a sidearm, is here. You can unlock several of her various color skins as you play.

Twyn (Page 8,9): This is an intriguing one, I must say. Twyn is essentially two skins in one and using an unlocked emote, you can choose between the male and female Twyns. If there is a “legend” behind this, I would be interested in learning more because male Twyn dons some sort of glasses and digitally morphs into female Twyn, who has a very different style and looks more like a rocker schoolgirl.

Spider-Gwen (Page 10) – Spider-Gwen is on page 10 of the battle pass. As is customary for the “featured” crossover skin in the battle pass. However, you must get past rank 100 to unlock the mask-off form of Gwen Stacy. And you must be two pages into the additional rewards section to do so.

The Chrome-controlling antagonist The Herald is this season’s bonus skin. And the timer on the website indicates that she will debut in 46 days. Almost the entire summer has passed since Fortnite Chapter 3, Season 3. The season actually started on June 5th, two weeks prior to the Summer Solstice. Just a few days before Fall officially begins, it comes to an end.

Answer 1: The notoriously sweaty soccer skins have sort of been replaced by Birdie. It makes complete sense that this skin is sweaty. Because Birdie stands in for the general athlete skin that the soccer skins also represented.