Slide for 30 Meters Continuously while Holding a Chicken

Slide for 30 Meters Continuously while Holding a Chicken. Avian Ambush Week Quests have come in Fortnite, bringing players a new series of chicken-themed challenges. To accomplish before the current season finishes, allowing them to earn some additional XP. With Fortnite’s Avian Ambush Week beginning March 8, 2022, the Fortnite Wild Weeks will resume. The quests this week are all about nature, notably the chicken. Epic Games has made Chickens a whole lot more hostile to celebrate.

The Bownanza Week kicked off Fortnite’s Wild Weeks on February 22, 2022, and was followed by Spidey’s Amazing Web Week on March 1. Things are starting to go awry when wildlife becomes involved and a new wild species emerges. In a way, yes. Although the chicken is a common sight in Fortnite these days, its behaviour has changed as part of Avian Ambush Week.

The Avian Ambush will have over nine tasks, according to iFireMonkey, a trusted Fortnite data miner. Each Avian Ambush Week objective is expected to award 5,000 XP, allowing players to earn a total of 50,000 XP from all of the challenges. So, without further ado, here is the full list of missions that players must complete in order to fulfil the Avian Ambush challenge.

Missions From Avian Ambush Week: Slide for 30 Meters Continuously while Holding a Chicken 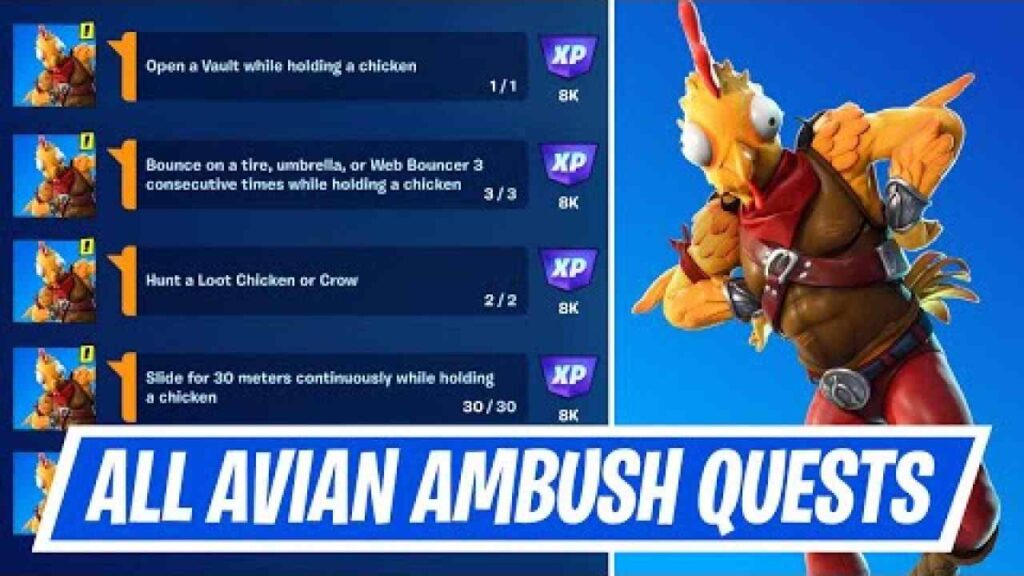 As one might expect, the majority of the tasks revolve around chickens, and players can find them in a variety of spots across the Fortnite Chapter 3 area. As a result, completing the Avian Ambush challenges is simple and may be done in a single location.

You’ll need to catch a chicken to fulfil the first task (and several others). To do so, use our chicken location instructions to locate one on the map, then chase it down until the ‘interact’ button appears. You’ll be able to pick it up if you press it swiftly.

What is a Fortnite Loot Chicken, and where can you locate one?

The Loot Chicken is the newest monster in Fortnite. This operates similarly to other loot fauna, such as the Shark or Crow, in that it will glow either purple or gold, indicating Legendary or Epic loot. So far, any chicken spawn can be a Stuff Chicken because they are essentially identical to regular chickens, however not all chickens will drop loot.

In Chapter 3, where can you find a chicken?

When the ability to hunt animals was enabled to Fortnite in the Primal Season, chickens were introduced. They’re still around, just like wolves, boars, and dinosaurs, and each has its unique set of skills. When killed, for example, healing goods are dropped. You may, however, grab a chicken’s legs and use them to float over the island with ease. Yes, of course.

In respect to complete the 30 metre sliding mission you have to grab the chicken first. You will get this chicken on the above provided locations. After getting the the second you have to fly holding the chicken and after that try to slide. By doing this simply you can complete this mission.

Hope so this article was helpful for you. We always keep covering all the recent updates related to Fortnite. To receive all these latest updates and news you can stay tuned to our website.

Previous article
How to Claim Free Holi Event Emote in Free Fire 2022
Next article
When Will NBA 2K22 Be On Game Pass?