New 8v8 TDM map in BGMI: In this article, we are going to show you and give you information about the new map in BGMI which is known as TDM 8v8, and players were very excited to get this map. And the newest BGMI map is released in the game and players are enjoying it very much also and playing the new map in TDM which is Santorini. Players are having full enjoyment in the game and by playing customs in the new TDM map 8v8 in Battlegrounds mobile India.

So there are some of the leaks of Battlegrounds mobile India TDM 8v8 map of the map Santorini which has been arrived in the game BGMI. Also, many YouTubers got early access to the beta version of the game map TDM 8v8 Santroni in The unranked. Modes are also the latest beta version live now.

Players have been playing through the map 8v8 in BGMI to get more information. On it please read the article fully and know more about TDM 8vs8 map Santorini in Battlegrounds mobile India.

Santorini is the newest BGMI TDM map in which we can play 8v8 and too team deathmatch in the BGMI game has only 4v4 TDM matches till now and now the new map is also there. Also in 8v8 there can play 4 squads together and challenge. So the new Santorini map of 8v8 TDM. Can have good and 3d experience and also with the more players, more teams, etc, and in the 4v4 TDM, there were 40 points and 10 minutes.

But now in the new extra TDM mode, there will be 16 players 80 points and 20 minutes time which will be very exciting. And now to play with the map will be larger. The team which gets 80 finishes will get the win of the TDM 8v8 and will win the match the highest killer in the TDM 8v8 will get the title of MVP. And will be the MVP of the match of Santorini map in the 80 points map.

The map is also very much bigger and there will be bigger things. Then the existing maps in battlegrounds mobile India. The maps seem to be bigger in 8v8 as the comparison. To the warehouse hangar in TDM 4v4, there were 40 finishes and 10 minutes to play. 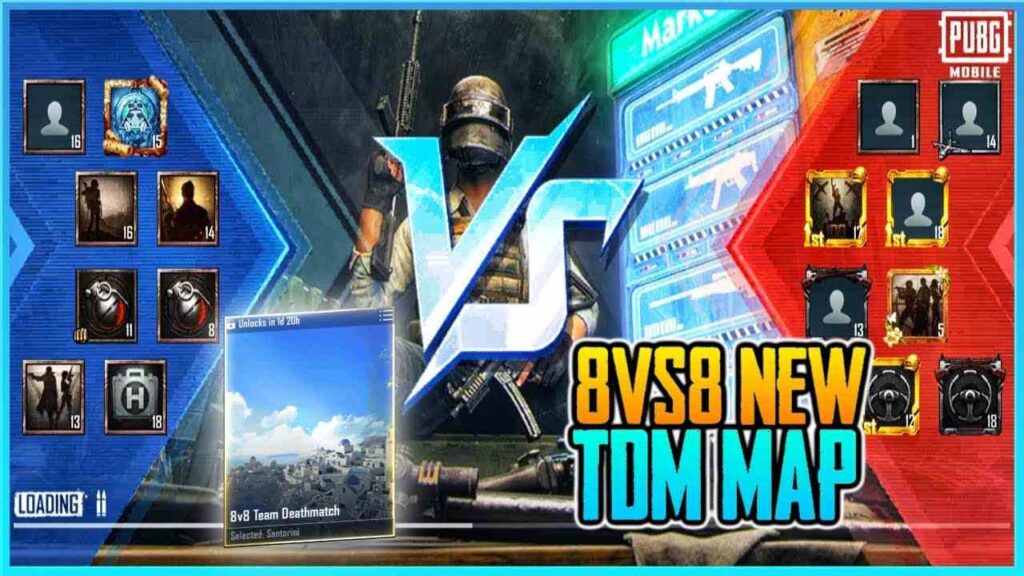 Santorini map looks so vibrant and big which is near to the location of seas in the game and the game which is design in the bigger way of the 8v8 TDM. Santorini map and now there will be 80 finishes a points and 8vs8 means 16 players. The location of Santorini is too vibrant and as you all know. That hanger was also available months ago with the new inbuilt map in-arena team deathmatch gun game library mode.

The Santorini map is now based on the sea area and belongs to the beach area which is very good as you know ruins also was a long map. 4v4 TDM and which improved the reflexes of many players by playing team deathmatch mode in the game battlegrounds mobile India. And players spawn at the different locations in the game in 4v4 team deathmatch hangar, arena, library, and now in 8v8, everything is same just the map will be new.

There is everything doubled in kills, points, finishes, and also other there will be intense fights from now in 8v8 map. Due to more players in the 8v8 and in BGMI, there is now very tough competition and players might be shocking. That they can call and invite 8 players at the same time in the room and also in the lobby too which can increase the space in the lobby and by the 3d perspective of the lobby.

So these were some of the facts and information about the new TDM map 8v8 so thank you for reading the article.