New Queen Of Hearts Fortnite Skin in Chapter 3: So, FORTNITE has once again added a new Skin in the game Fortnite now has been consistent in giving players better game experiences and making the game more competitive and interesting for players. It has been constant in terms of releasing new skins or anything related to the game.

The skin is the QUEEN OF HEARTS. Affter it was made available in the game it has gained a good amount of popularity.  So, in today’s article, we will discuss Skin and also other few things related to the topic. Also, most importantly we will also discuss that CAN YOU BUY THE SKIN and our opinion on the skin to help you.

So, a poker player definitely would know about the QUEEN OF HEARTS. So, for those who don’t know what is QUEEN OF HEARTS then it is a playing card in card games. We can easily know from what object the QUEEN OF HEARTS SKIN is inspired. So, the inspiration for the skin is the QUEEN OF HEARTS card in poker. Now it is obvious that it is mostly containing RED and WHITE colors. It become quite popular since it has been released.
Now let us discuss the price of the SKIN. So, the QUEEN OFF HEARTS will cost you 1200 V-Bucks. Which is really very much costly. It should have at least given some kind of reward with the Skin. So we will further discuss the topic of Buying the skin in the article. 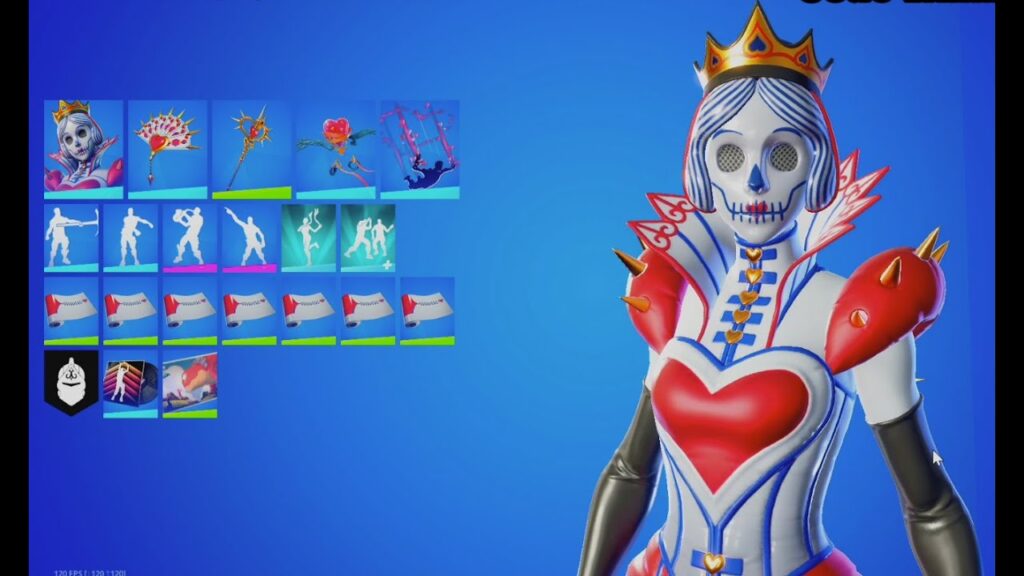 Description About the Queen of Hearts Skin

Now the outfit mainly contains the RED and WHITE colors with some stripes of blue and green color. and it also contains a small heart of yellow color on the vest and a big heart of red color on the chest. The skin also contains some yellow-colored spikes on the shoulders. Overall this is good skin but not great.
Now if we talk about the appearance of the skin as the word QUEEN is present in the name so it is a female character. It also has a queen’s crown with white hairs and a skull as its face, Which gives it an old and classy look of a ghost. If the designers have tried to give it a creepy look then they have been successful in doing so. The skin is undoubtedly cool but really expensive, but it is not that unique.

OUR OPINION ON THE SKIN

The QUEEN OF THE HEARTS skin is good skin but we won’t say it is great skin. The skin is really very much expensive as you need 1200 V-BUCKS to buy it. So in our opinion, you should not invest your V-bucks in this skin as the skin has some negative points. The skin has gained popularity which is a fact, but it has not got that much publicity which the previous skins did. The skin is not that attractive or has anything special in it. You instead buy another thing with the 1200 V-Bucks. But. if have sufficient V-Bucks and you can afford to spend them then you can buy this skin if you like. There are fewer chances of the skin being preferred by the masses. So the skin is not that good nor that bad it’s your personal choice whether to buy the skin or not.
As for now, we can just conclude that you can buy the skin if you want to. But, you must buy it after thinking twice and also by calculating the amount of V-Bucks. The skin is definitely cool but not unique.