Brawlhalla Viewership Rewards: Viewership rewards are Brawlhalla’s way of saying thank you for supporting their amazing community. This was accomplished by frequently having Brawlhalla Livestream with the devs, a professional player, or even at legitimate esports events. In Brawlhalla, you may learn more about Viewership Rewards, including how they function and how to use them. Do read this article for information.

Brawlhalla is a free-to-play fighting game for macOS, Microsoft Windows, PlayStation 4. Nintendo Switch, Xbox One, Android, and iOS, featuring full cross-platform play. The game was first shown at PAX East in April 2014, and it went into alpha later that month. An open beta was made available in November 2015, followed by the game’s release in October 2017. The game contains 54 playable characters known as “Legends” as of October 20, 2021, each with their unique attributes, loadouts, and aesthetic skins.

What Are Viewership Rewards in Brawlhalla?

Mammoth Coins, the money of Brawlhalla, are its currency. However, you must first purchase them before you may use them. In general, you won’t be able to get all of the skins you want in-game this way. As a result, Brawlhalla created Viewership Rewards, which you may earn by simply watching their streams.

When the Limited Edition skins, emotes, weapon skins, and cosmetic items are among the perks. And who wouldn’t want to get something for anything? So, how do the Viewership Rewards truly work?

How do Viewership Rewards Work in Brawlhalla?

As of currently, the Viewership Rewards system is only available on Twitch. Because you can’t get it anyplace else, your YouTube viewing time doesn’t count. Make sure you’re logged in to save your progress on multiple songs while viewing the Twitch live. It’s worth noting that each track will earn you points, which will allow you to progress through the stages. You’ll earn a new reward at each level. You get 5 points for every 5 minutes, which works out to 1 point per minute, but the rewards are mentioned after every 5 minutes.

Each track will have a separate set of rewards (which are usually different, but can sometimes be the same). As you earn points while watching the stream, you’ll level up.

You’ll find an inventory on the tab beside Levels of each track. This inventory contains all of the Viewership Rewards you’ve been able to claim thus far. It won’t matter whether you claim them afterwards unless you’ve given someone else access to your account. 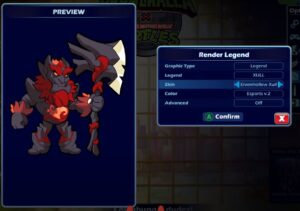 Every week in Brawlhalla, different types of tunes are played. You won’t constantly have a new broadcast with new goodies for the viewers, though. There is no way to make progress on a track if you miss it. Your points will only be counted in the current stream’s current track.

This is all about how Brawlhalla’s Viewership Rewards operate.

Some of the most recent Notable Viewership Rewards in Brawlhalla: