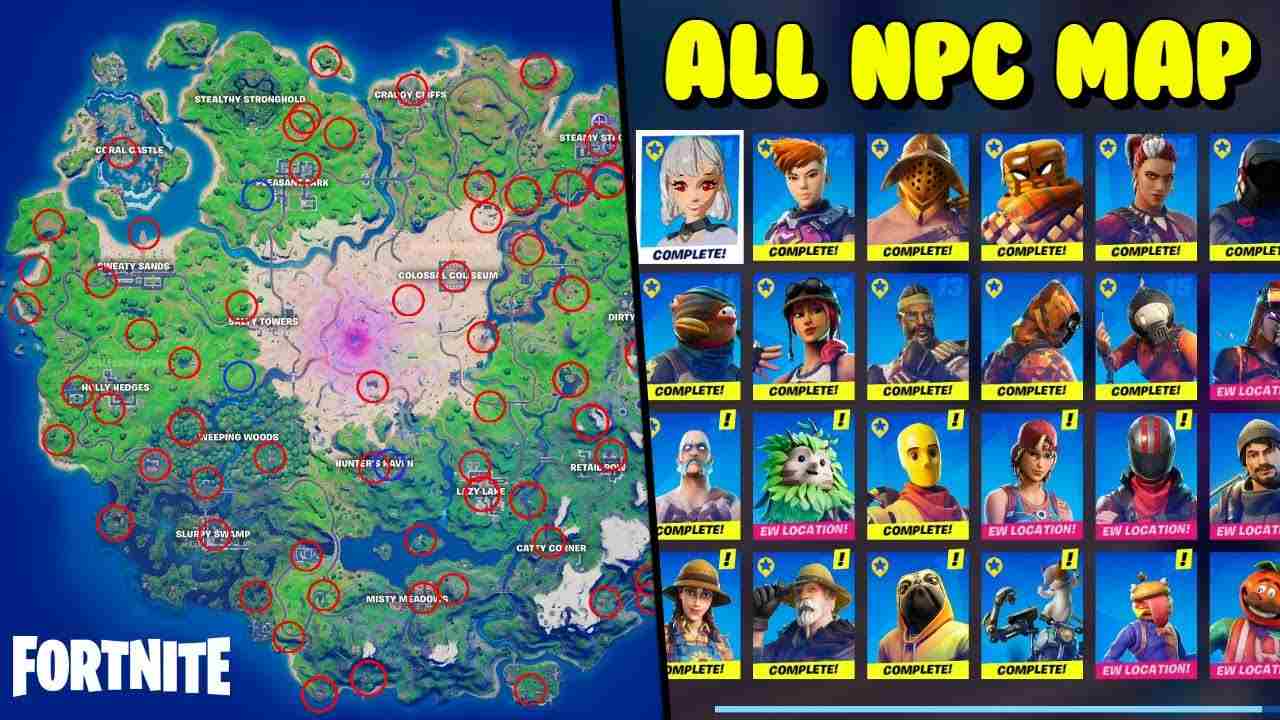 All 22 NPC locations in Fortnite Chapter 3: NPC’s are important to any game, as they make the game a lot more fun. When the NPCs are interactive, it adds a whole new layer of fun. Fortnite is one of the games, that is well known for its skins and NPCs as well.

Previously, and right from the launch, the NPC count in Fortnite has been 20, but after the recent release of update 19.10. Things got a little more interesting and we have 2 more NPCs in the game. And, they play a considerable role, in the game as well. Fortnite really puts in a lot of effort and attention to detail, while designing all the NPCs that are part of the game.

Pick these fruits from small bushes around the Island, then throw one near a Klombo to lead it your way. Remember: after Klombos snack a bit, items spout out! Have you accidentally (or purposefully…) provoked a Klombo? Calm its rage with none other than a Klomberry. pic.twitter.com/Y4HASWgLCq

Compared to the last two chapters, Fortnite Chapter 3 has increased the number of NPCs in the game. Even the story, that currently underway seems a lot bigger than many predictions go.

Fortnite has put a foot forward and actually introduced one of the most popular comic book characters Spider-Man as an NPC, during the initial launch of Fortnite Chapter 3. Spider-Man and The Visitor were initially the NPCs that were introduced, and slowly all the others made their way.

Where to find all 22 NPC locations in Fortnite Chapter 3:

Considering the sheer number of NPCs in Fortnite, it might feel like a daunting task to keep a track of where particular NPCs are. Worry, not we have you covered. We have curated this article, which can act as a guide for finding and locating all the 22 NPCs in Fortnite Chapter 3. Some of these can be found and hired as well.

Some of these NPCs will be of great use in completing the weekly challenges as well. Some of the NPCs accept golden bars reveal the future storm cycles and give you a rift as well.

All 22 NPC locations in Fortnite

Below, is the list of all the NPCs that are part of the game and what players can do with them.

The newly added NPCs with the update 19.10 are Haven and Galactico – the two NPCs were rumored to debut in the game, but Epic games took some time and introduced them after a period of time.

The last and the latest NPC is Galactico:

All of the above-mentioned NPCs are currently active in Fortnite. And all of these NPCs are assured and guaranteed to respawn after every single match of Fortnite. Players should find the NPCs without any trouble, but be a little active since the NPCs can keep roaming around from the usual places, they were supposed to be.

If 22 NPCs sounds like a little less, there are some strong rumors going around that Epic Games has so many plans for introducing new NPCs to the game, before the end of Fortnite Chapter 3 Season 1.

If there are any new developments regarding the addition of new NPCs into the game, we will have you covered with the latest news on officialpanda.com