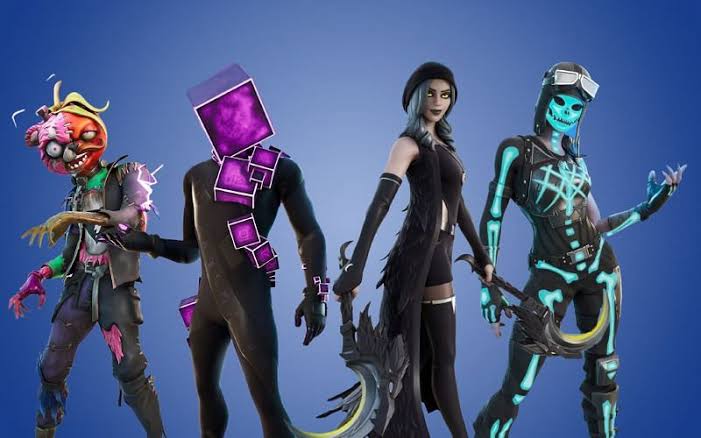 Recently a brand new ione skin has just landed in the fortnite item shop. That is got up to the another halloween skin and i am telling you that whether you have to buy the Ione skin or Not? With doing a full review.

Her eyes looking so creepy with yellow color and cone shaped pupil. A nice necklace, nice little moon on the belt. A cape cloak coat which gives a raven vibes. with this you get the black bling, the wolf man crest. Its basically two double pickaxes put together pretty much. There’s a wolf on either side as you can see little wolf on that side.

Then by looks of it there’s a wolf in  the middle. Which you can say a trio of wolves. The beautiful thing is basically the pickaxes which is named might and malice. You also can get a single one that is called misery. So that’s the might and malice when double and you have got misery there as the sort of slightly bigger one. It is similar to the shape to that of pickaxe that we got with v from the fortnite crew.

Also Read: Pump it up Emote in Fortnite ; New Emote

In game its axes looked very larger than in the shop. It is more likely to use the misery than that of might and malice. Unless they are like world beaters like dual edge or something like harmonic axes.

As i have also thought and also you maybe that it has only two back bling Might and malice and misery. But not it has five more back bling that means total seven back bling. One is the sword of the day walker. Second the tendrils of the venom. A iron cage that is looking decent from all the others. And this is the only one which I thing you must go with. As all of the others are looking just hilarious. And one more hemalergic spikes.

My Opinion About Skin

I have gone through like 800 and 900 skins and i don’t find any that work well with this skin. I think the coat looks stupid. It may have the feature to remove the coat off if you can do something like that or have some option like that it would be much better. And also the back bling not also have that much ability that can suprised me. While wearing cape she looks a total mess.

should You Buy this: Yes or No

So coming to the conclusion I definitely say I am not personally fan of the skin. And if you think that this is the best skin in  the halloween so you cam buy this. But according its a total waste, i suggest you to not buy this.

Also Read: How to Get Bot Lobby in Fortnite Season 8