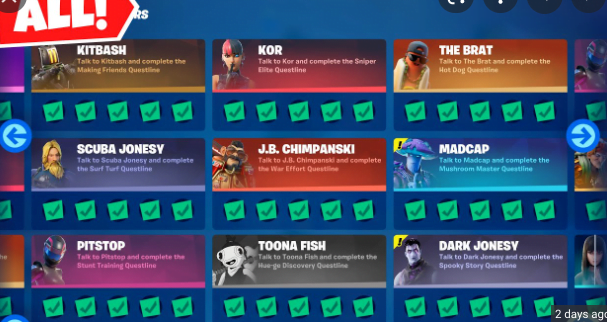 All Wrath Character Punchcards: Fortnite’s season 8 has just kicked in! We all know that Fortnite is one of the finest games and also it comes to adding up new challenges, missions and quests, etc. Epic Games is very well aware about each and every strategy to keep their audiences glued to the game!! Said that, Punchcards have just made a comeback in Fortnite Season 8. Punchcards have very recently replaced the Legendary and Epic Quests.

What are Fortnite Character Punchcards

In Fortnite, Players have to visit certain characters and also complete the quests that they assign.

Thus players will be getting a chance to earn 80000 XP in total.

New character punchcards will be add in the game every Tuesday. Therefore Wrath is add in Fortnite Season 8 Week 2. Wrath has introduces the Escaped Tenant Questline. Find the punchcards below! –

To begin the quests, you will have to find the Wrath first and you will have to speak to him. Locating him will not be a difficult task as he can be found in the west of the abandoned IO base, in the remains of Stealthy Stronghold.

How to complete the 5 quests

First quests can be complete in the remains of Deep Woods Dish. The abandoned dish stations have IO chests that will offer tech weapons. Keep looking until you find a recon scanner and also then shoot it at two enemies. Second quest can be done in the same location because the Deep Woods Dish has a jump pad attaches. NPC’s can give players storm forecast. The last two quests involve completing a bounty which can be done by approaching the bounty board, finding your target and also eliminate the target within 6 minutes. Finish these 5 quests to get exotic rewards!!!

What are the other Season 8 Character Punchcards

Also Read: New Boss is back in fortnite Season 8