Tier Reset in BGMI: Battlegrounds Mobile India is all set with their new update. BGMI players have just witnessed C1S1. And there is just one day left for the season rush. As we all know that this is the first time that Krafton has introduced the new cycle into the game. Previously there were just season and the season numbers, But now there are cycles! Each cycle will be subdivide into three seasons. C1S1 is going to end on 17th september 2021 and C1S2 will be soon kicking in!

Till then, here we have all the tlTier Reset in BGMI that you need to know!

Also Read: Best Sensitivity for BGMI 1.6 Without Gyroscope in 2021

What are the ranks in BGMI?

If you are an avid BGMI gamer then you must be aware about Tier Demotion. That whenever the season ends and a new season starts whichever tier you were on in the previous season drops down to a new lower tier. The demotion from your current season to next season will be as shown below. 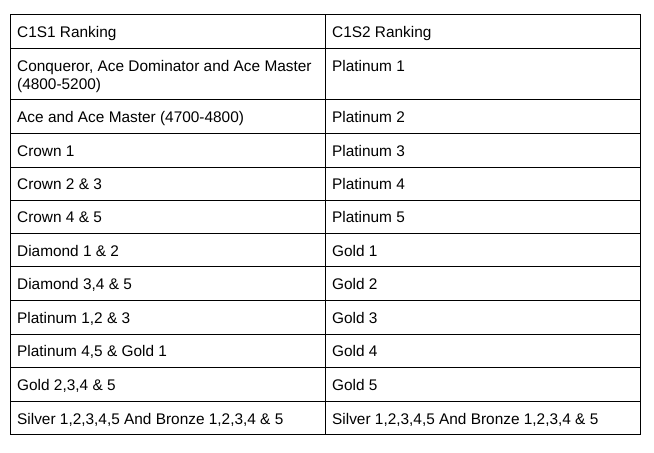 What new updates can we expect in C1S2

A year ago Government Of India had banned Player Unknown Battleground Mobile (PUBG), but few months later, Krafton introduced BGMI in July,2021. As a result the entire gaming community is now hooked to BGMI. We know that Krafton releases new season in every couple of months. Initially, BGMI was only available for android players and PC players, but eventually, it is now available to IOS users too!!

New Mode- The new season is expected to witness a new mode- THE CELL MATRIX MODE. This new mode and the new RP will have some more cool outfits and killer weapon skins!! The Marine Predator Set is one of the most awaited outfit in BGMI. The cycle 1 season 1 witnessed a lot of changes like 2 RPs in one season. The duration of RP challenge was reduced from 8 weeks to 4 weeks.The price of normal RP has been changed to 360 UC and that of Elite RP has changed to 960 UC for all the seasons.