FAMAS Weapon Guide for BGMI – Know About This Assault Rifle

FAMAS Weapon Guide for BGMI: BGMI (Globally known as PUBG) game’s main interaction is that it has a variety of collections of assault rifles, has been adding new weapons over time. One of them is newly introduced is FAMAS, a 5.56mm assault rifle. This gun is exclusively available for Livik Map. In this article, we will know how is this new weapon, new meta, or just another ok-ok gun?

As mentioned earlier FAMAS was added in the game PUBG in the update of the 1.2 patch update. This gun is exclusive for Livik only, though you can find it in the training ground for practice. This gun runs on the ammo size of 5.56mm, which are easily available throughout the map Livik. In real-world scenarios, the 5.56mm ammo is more accurate and trajectory to use. Let’s find out is it any good?

One of the main reasons players choose their weapons based on how is the recoil of the weapon. People used to love easy-to-control recoil guns, thus they can shoot easily to the target. And this is part where FAMAS lacking the most. It is not easy to recoil guns that is one of the reasons players found it less interesting. That does not mean it’s recoil impossible to control. But people find alternatives to this gun (like M416) that’s why FAMAS makes no sense to them. 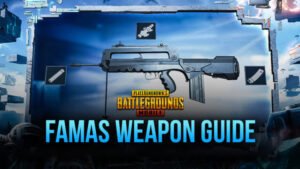 FAMAS shines in the category of fire rates too. It has a good fire rate which is important in close-range fights such as 1v1. Players may relate this that higher fire rate guns are more powerful in close scenarios. FAMAS may be a good choice for you in Livik next time.

In FAMAS, you can only add a few attachments, there are only 4 slots-

A Muzzle slot for – compensator/suppressor/flash hider.

A Magazine slot for – extended/quickdraw/extended quickdraw.

And A Scope slot for – All types of scope (except 8x). 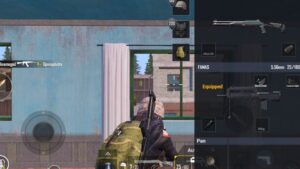 Surely you can use FAMAS for close-range fights because of its high fire rate. But it is not advisable for players who struggle to control its recoil. The solution for that is to go to the training ground and do some practice with this gun. The recoil is close to some other 7.62 ammo guns. Anyways I found personally FAMAS is an interesting choice for close-range fights. You can try this gun at once just for fun.