The epic games have developed this Fortnite. Season 7 in Fortnite was much enjoyed by the players as there were many modes such as imposter, new skins such as kymera skin, emotes such as bim bam boom emote, and other things such as aliens and ufos in the Fortnite game.

In this new Skyfire event, there is a hologram sky beam. The countdown would be in the Fortnite lobby. And we would also provide what would happen to the mothership during the event based on the timer description.

In this Fortnite Skyfire event, there are three levels of the countdown and a hologram sky beam. On the other hand, in this Skyfire event, the alien mothership would begin abducting the corny complex, starting from next week. In this period, many countermeasure devices such as orb would also work aboard the Fortnite game’s alien vessel. 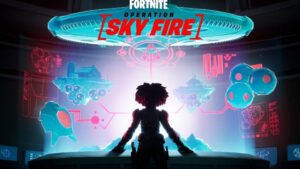 What is the release date of chapter 2 season 8 in the Fortnite game?

The release date for season 8 in the Fortnite game is 12th September 2021. At the same time, there would be an end to chapter 2, season 7 in the game.

In this article, we have covered detailed information on the Fortnite Skyfire event, its stats, its release date and time of release, and the end date for season 7 in the game.

We have also covered the faq on the release date of season 8 in the game. The players are eagerly waiting to play in the new season 8 as there would be new skins and many more things to have a different gaming experience.

We hope you may have liked our article as we have tried to cover the information in a very straightforward way. And you would be able to find all the information related to the Fortnite Skyfire event.

Read More: How to Build fast in Fortnite Mobile