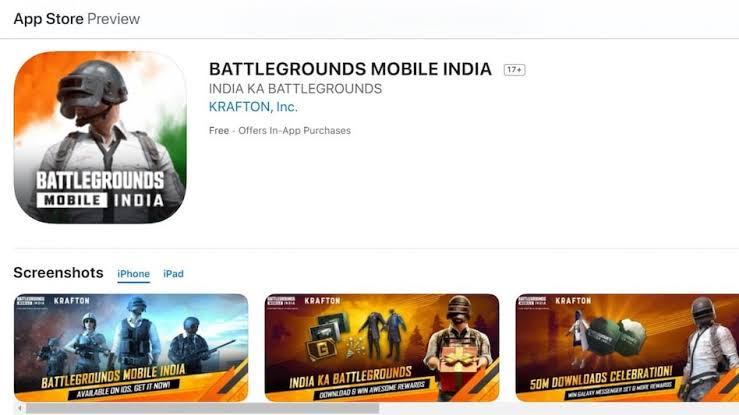 BGM For IOS Download link Direct: All PUBG players are aware that PUBG Mobile has been ban in India .With Google and Apple removing the game from their respective app stores.

In the nation to comply with local government demands. However, it has now been reintroduce to India with a bang and a slew of new features.

In the South Asian market, the game has been rename Battleground Mobile India(BGM India) and is accessible for download from the Play Store for any user in the country.

Battlegrounds Mobile India(BGM India) will be available for Android users in India starting July 2, 2021. However, the game has not yet been launched for iOS users.

However, BGMi for iPad iOS users has recently been launched. You can get it directly from the Apple App Store. We also provide the BGM India For Direct app store link.

News has been extensively disseminate on social media that the firm has finally published the Indian version of PUBG Mobile for Android users, which is BGM India.

Dubbed Battleground Mobile India(BGM India), after a long wait. Whose pre-registration began on the 18th of May, 2021? It is now available to all users.

As everyone was desperately waiting for the launch of BGM For IOS. Now the wait is over because today Krafton officially launched BGM for IOS.

BGM for IOS can be download by the link which I will provide you in this article and you can also directly go to the app store.

Also Read: How To Send UC In BGMI To Friend | Step By Step

Above given was the information about how to Downloadoad BGM for Ipad, iOS

As everybody knows that Pubg , when launched in India it boomed. This has never happen with a game, it got a lot of popularity and people enjoyed playing it.

But as each of you  that Pubg got banned in India , due to security reasons. And all the players, streamers, and the people who generated a lot of income with it, became sad.

But at last we are Indian so we need to support our country. And we have a very huge population.

That is why Krafton thought to bring the game back for India and before few months they officially  launched Battleground Mobile India(BGM India).

And now the IOS users were sad about it, so today in the morning a good news came.

Which was, that Krafton have now officially launched Battleground Mobile India (BGM India for IOS users) for IOS users.

At last I would like to conclude by saying, however the game is but the main point of it is to enjoy.

So enjoy playing it with friends and family.