Genshin Impact x Sweets Paradise Collaboration Announced: The massively popular multi-platform Action role-playing game has announced a collaboration with Sweets paradise. This event takes place from September 1st till the 30th of that month. They have planned to collaborate with 12 stores across Japan, featuring various art pieces of the game along with the cafe staff dressed as Genshin Impact characters. Most of the stores are in Tokyo, in places like Shinjuku, Harajuku, and Nagoya.

According to its website, the cafe has planned to have a special menu of Genshin Impact-themed foods as well. A more comprehensive list of food will probably be announced a bit later. 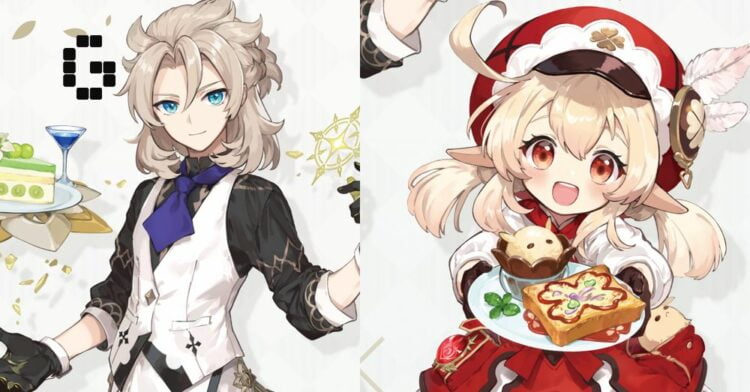 Japan isn’t foreign to frequent crossover events/merch and Genshin being pretty popular. Especially among young women there, the chance of actually getting a limited edition merch looks pretty slim. The official merch list isn’t out yet. The latest illustrations feature all the Monstadt characters from the game as cafe staff, Also including more recent additions like Eula and Rosaria. So far the art shown appear to be in Chibi style. The fact that Klee and Albedo received full-sized art appears to be a good sign for the rest of the cast too. Given the nature of the Cafe collaborations, one can expect to see some form of pin badges, key chains, and celebratory coasters.

While the anime-inspired aesthetics and a star-studded Japanese dub cast probably explain the colossal impact of this game in Japan. Genshin pretty much accounts for roughly 35% of the TV ad times. It’s actually crazy if one considers the amount of money miHoYo is spending in Tokyo. The story and art style resonate pretty well with the community there. It is probably the reason that they would make such a large collaboration across the country.