Fortnite Place Boomboxes in Believer Beach: This week in Fortnite’s famous challenges, we have more espionage for Doctor Slone to perform, including a new mission where she asks us to place two boomboxes at Believer Beach. These aren’t regular boomboxes; they’re a way of spying for her, so don’t think you’re just putting down an item from Fortnite that has been unvalued. Rather, you’ll be planting them in particular areas.

On Fortnite Week 3, the alien welcoming committee is throwing a party, which means you’ll need to set up boomboxes in Believer Beach to make them feel welcome. Sunny is in the forefront of the pro-alien movement, but there are others who seem to agree, including Joey, the alien in human form, and Beach Brutus, who is admittedly more intriguing. While we continue to piece together the narrative, here’s a list of all Fortnite boombox sites in Believer Beach.

In the Fortnite Season 7 narrative, Believer Beach is the epicenter of the pro-alien movement. It just lacks one thing: music. There are bounce pads with small green men, balloons, and numerous NPCs celebrating on location. At Believer Beach, you’ll only need two boomboxes, and there are a total of four within the area’s boundaries. They’re all over the place, so choose the two that make the most sense for you to finish this Week 3 Legendary Quest.

You won’t have to do anything further once you’ve placed them, but Slone has a number of legendary challenges for you to do, like installing signs at Pleasant Park and Lazy Lake, alien light communication equipment on the tops of mountains, and collecting cat food. Cat food, to be precise. Perhaps it appeals to extraterrestrials? I’m not sure. 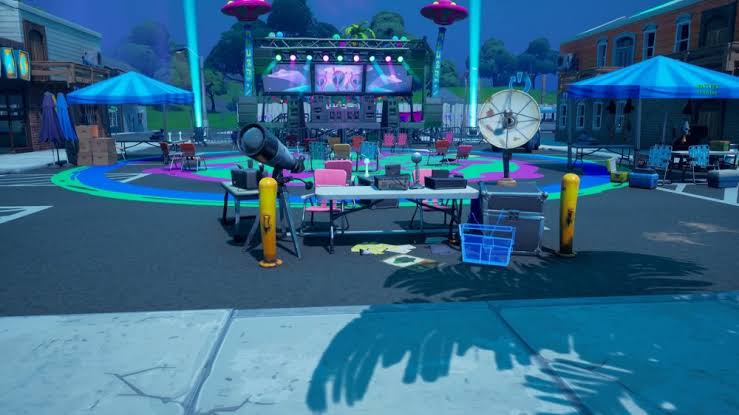 Other Details on Place Boomboxes in Believer Beach

Slone’s long-term ambitions, and whether she has designs on the aliens, the IO agency, or both, are yet unknown. The mothership is becoming an increasingly important aspect of the season. I wouldn’t be shocked if Slone handed us assignments aboard the ship itself in the future.

Will massive portions of the map be blasted apart by lasers in the way of Independence Day? Given how things typically go in the Fortnite universe, but the alien vs IO battle has so far been on a limited scale. With only troops and smaller ships involved. The aliens, on the other hand, are OK with us sometimes coming up to their spacecraft to hang around.

Also Read: How to get the Thanos skin in Fortnite