SuperMan skin in fortnite | Some Hits Come From Fortnite

SuperMan skin in fortnite: A pair of old glasses were featured in the second teaser, which was shared on the official Fortnite social media accounts. The description of the glasses appears to imply that Superman will appear in Fortnite Season 7. We could be able to see Superman Skin in Fortnite.

Fortnite began posting teaser videos to their Facebook, Instagram, and Twitter accounts on June 5th. Each teaser contains three items, each with its own description on its respective social media pages.

The first teaser revealed a small toy Fish sticks, a carton of milk, and a new alien weapon. Season 7 is expected to bring weapon charms, a new milk consumable, and an anti-gravity. The second teaser featured a Save The World guitar, glasses, and shotgun. The glasses could be a hint that players will encounter Superman in Fortnite.

The Superman glasses were teased on Twitter. “When placed onto the face, this strange plastic device seemed to make us appear as unrecognisable.” This could be a reference to Superman’s unimpressive disguise when he dresses as Clark Kent. The only distinction between Kent and Superman is that one wears glasses.

A slew of familiar DC characters, such as Batman, The Flash, and Aquaman, have made appearances in the game. Not to mention, Marvel has amassed a formidable roster that includes Iron Man, Captain America, Thor, and many others. Taking into account that Season 5 came and went with Nintendo without a hint. 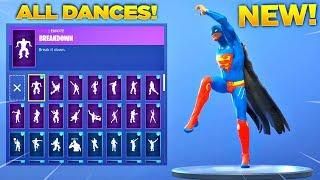 Because he is from another world, Superman would also fit the Season 7 theme. Season 7 of Fortnite has an alien theme, which opens up a lot of possibilities for alien-themed crossovers.  There are different other silhouettes, but they all have a similar generic form like Superman.  This might mean that in the near future Samus will come to Fortnite.

When will Superman Skin appear in Fortnite?

That being said, we won’t know for sure if Superman will appear in Fortnite until Season 7 begins. These glasses could be a new device that turns a player into a prop. Players won’t have to wait long to find out, as Season 7 begins in a few days.