Perfect RegiRock Pokemon Go 100 IV: Pokemon GO is a mobile game. Regirock is a legendary type Pokemon in Pokemon GO with a maximum CP of 3530, 179 attacks, 309 defenses, and 190 stamina. It was discovered in the Hoenn region at first. Regirock is vulnerable to moves of the Fighting, Grass, Ground, Steel, and Water types. Partly Cloudy weather favors Regirock. Rock Throw and Stone Edge are two of Regirock’s best moves.

Also, the Regirock Pokemon can reach up to 100 IV which is 100% points in Attack, Defense. 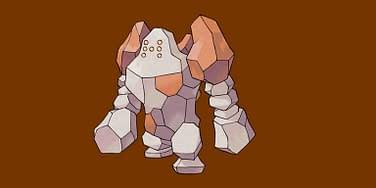 Because it is a Rock-type, you can normally find and catch Pokemon GO Regirock in Quarries, Farmland, and Hiking Trails. This specific Pokemon, however, can only be captured after defeating it in a Raid Battle. Raid Bosses spawn at Gym locations, and players enter the battle with Raid Passes.

Also Read: how to Transfer Pokemon from GO to Home | Complete Details

Regirock is a legendary Rock Pokémon with the moves Rock Throw and Stone Edge. Also, It has a high Max CP of 3,122 and the Pokedex says that mankind sealed Regirock away a long time ago. It is said that if this Pokemon’s body is damaged in battle, it will seek out suitable rocks to repair itself on its own. Continue reading the article for a comprehensive guide to Regirock.

Regirock is a legendary Rock-type Pokemon in Pokemon Go with stats of 179 attack, 309 defense, 190 stamina, and a max CP of 3530. It was first introduced in Generation 3 in the Hoenn region. Also, this Pokemon is vulnerable to Fighting, Grass, Ground, Steel, and Water moves, and its attacks are amplified by Partly Cloudy weather. Because Regirock is a legendary Pokemon, there is no such thing as Regirock evolution. Regirock’s best moves are Rock Throw and Stone Edge (11.76 DPS), with additional moves listed below: