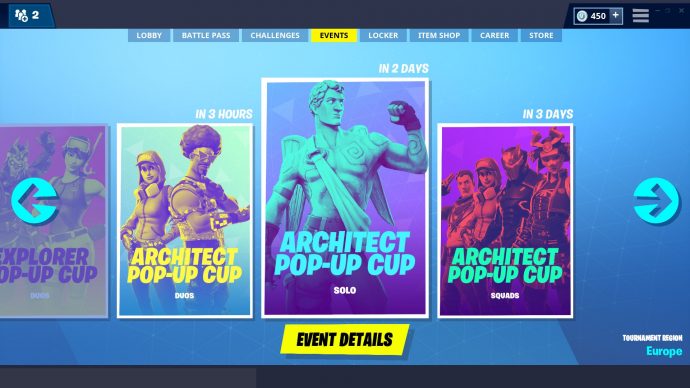 Architect Top up Cup Fortnite 2021: The event API endpoint for Fortnite now includes a new ‘Architect’ Pop-Up Cup. This cup puts a unique spin on a key feature of Fortnite’s Battle Royale mode. according to the Architect Pop-Up Cup Fortnite description, players will be able to edit any player-built structure. The flow of building combat would be drastically altered as a result.

If you’ve ever played in a Pop Up Cup, you’ll be familiar with the majority of the rules for the Architect Pop Up Cup. Here’s a rundown of what to expect for those who aren’t.

The Architect tournament, like all previous Pop Up Cups, will be open for 5 hours between 16:00 and 21:00 GMT (11:00 – 16:00 EST), and any Architect matches you join during that time will be counted towards your overall score. Throughout the series, different 5-hour slots will open up for solos, duos, and squads, and you can participate in as many as you want.

You earn points for both eliminations in a single match and are one of the match’s last survivors. If you earn 20 points before the timer runs out, you’ll receive a gold tournament pin for bragging rights.

The Architect Cup, like all Pop Up Cups, operates differently than standard Fortnite matches. The following are the changes you can anticipate:

Typically, players are limited to editing only structures that they have built; the goal of this Pop-Up Cup is to remove that restriction, opening up a new world of possibilities. According to the other information listed for this event, it is a Solo playlist that functions similarly to other Pop-Up Cups; eliminations earn points, and a tournament pin is worth 20 points.

The initial reaction to this idea appears to be mixed; while some players are excited about the variety it will bring to the game. Others claim it will disrupt the flow of combat. What are your thoughts on allowing players to edit all player-built structures? Keep an eye out for updates.

We’ll keep this page up and running because many of the points below are transferable across all Pop Up Cup formats, and because the edit change may be reintroduced later in a different form.

Fortnite’s Pop Up Cup event series has been running since the Scavenger tournaments in November 2018. With the release of Fortnite V7.30 on Tuesday, Epic Games has introduced an all-new Cup format known as Architect. Which has a new set of rules that sets it apart from the rest.

Also Read: Naruto Skin in Fortnite | How to get?