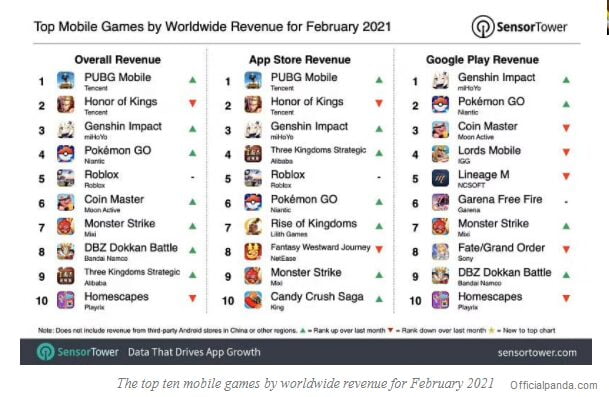 In last year PUBG Mobile is the Highest-Grossing Mobile game in 2020 with more than 2.6 billion revenues. PUBG Mobile launch in 2018 by Tencent. after launch they are making the record popularity, cracking, creating every since.

PUBG Mobile is the highest-grossing monthly game in August 2020 but lost our position to Honor Of kings and many other popular in the Chinese Region.

Five months later PUBG Mobile is back to the top. Now PUBG Mobile is the Highest Grossing game for April according to the report by the data Sensor Tower

PUBG Mobile is a worldwide grossing game in April 2021. PUBG Mobile from Tencent studio with 260 million in player spending. Which is 16.2% growth from February 2021.

Approximately more than 66% of PUBG Mobile revenue comes from China. its localize version, Game of Peace, followed by 7.4% from the United States and 3% from south Arabia. PUBG Mobile is the top-ranking grossing Mobile game for February 2021.

Honor Of Kings is another Tencent studio game. it is second place on this list. The game earns 218 million and 57% growth in April 2021. More than 95% of income comes from China and 1.6% from Thailand.

Genshin Impact by miHoyo launch in September 2020. They are Sitting on this list third Place in the top revenue. They are garnered more than 873 Million USD In revenue in five-month.

Pokemon GO, Also spot to finish in fourth place in the list. They are garnered more than 124.2 million USD and they increase 95% a year on year grossing revenue. Highest-Grossing Mobile Game .

Another Roblox is fifth place, coin is sixth place in this list. This report according to the Sensor Tower.